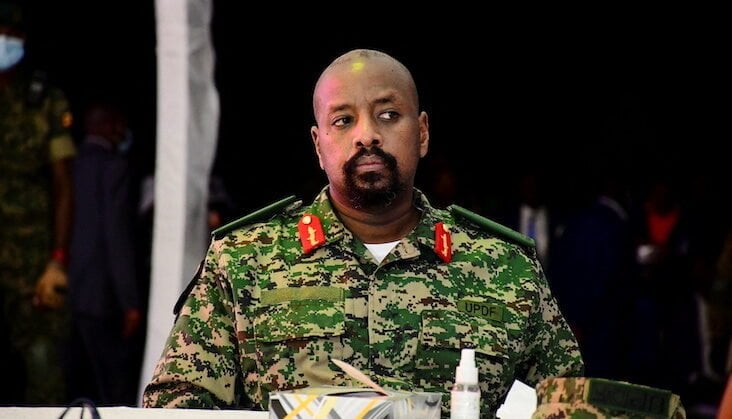 Muhoozi Kainerugaba, the son of Ugandan President Yoweri Museveni, has once again gotten into the nerves of Kenyans.

This timeThe army general irked Kenyans when he questioned whether Westlands is still up for sale just months after causing a storm on social media over plans to invade Nairobi.

“Is Westlands still up for sale?” the first son posed on Twitter.

Kenyans however did not take his comment lying down. Some slammed him saying that he can not afford it as others asked him to focus on his country’s problems .

“Muhoozi or whatever you call yourself, we deeply appreciate your concern about Westlands but unfortunately neither you or your father you can afford a house in Westlands. We forgive you but strictly advise you not to tweet under the influence of alcohol again. Behave!” a twitter user said.

“It is the most expensive constituency in Kenya, so can never be up for sale,” a netizen commented on his post.

“Have you folks been able to manage ebola in Uganda? Our brothers need good health and a secure Uganda not dictatorship and torture your father subjected to them. We don’t need ebola in Kenya, our governor is busy cleaning the whole Nairobi,” another tweeted as another added, “Westlands economy can feed your country’s budget for five years and still provide enough for your family to steal.”

In October last year, Muhoozi angered Kenyans when he said that it would take less than two weeks to capture Nairobi and make it part of Uganda’s territory.

“It wouldn’t take us, my army and me, two weeks to capture Nairobi,” he said adding that he would prefer to live in Riverside or Westlands once the invasion is successful.

He later apologised about his tweets and said it was a joke.

Uganda, through the ministry of foreign affairs, distanced itself from Muhoozi’s tweets saying that it does not conduct its foreign affairs policies and businesses with other countries through social media.