Can You Hold A Snake As Nameless’s Daughter Courageously Did?

Home - News - Entertainment - Can You Hold A Snake As Nameless’s Daughter Courageously Did? 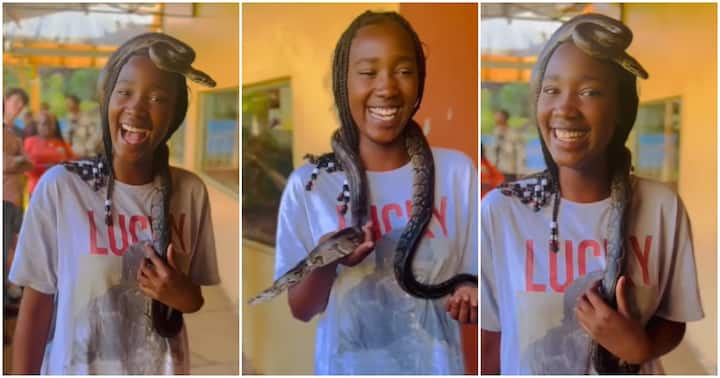 Can You Hold A Snake As Nameless’s Daughter Courageously Did?

Nameless was left in shock after his elder daughter Tumiso agreed to have a snake placed around her neck and even on top of her head.

The singer’s family had gone out on Sunday and seems like they visited a museum, judging from the photos and videos that they shared online.

Nameless could however not bear seeing his daughter in that state.

“Waah, like really, seriously. Are you kidding me. Are you alright. It is going under your arm,” he could be heard saying in the background of the video where Tumiso was carrying the reptile.

An attendant however explained that the young python has been tamed and trained not to bite and can even be carried by a child.

Nameless was however not convinced.

“Stop lying. How is it trained. I can not touch it. You are not feeling something?” he asked Tumiso and further question if where she belonged.

“Whose child is this?” he jokingly posed on his insta story.

Nameless was however impressed by his daughters courage and asked her to continue being fearless.

In a separate video, his attempt to touch the python was futile because he was too scared.

“Dad it is not gonna do anything,” his daughter encouraged him.